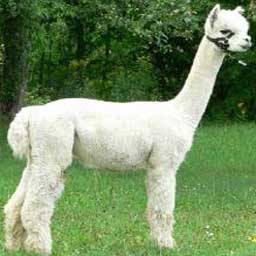 First the Back Story

A little back story is needed on Tri-Star. From 2000 through 2003, Donna Pearre and Carole Van House at Avalon Farm Alpacas bred Avalon’s Peruvian Aristocrat to Avalon’s Peruvian Celestial Dream three times. The results of those breedings produced three stellar breeding males: Avalon’s Aries, Polaris and Tri-Star. Polaris was purchased by Sue Evon at Sleeping Monk Farm. Her words on Polaris from February of 2018:

“Our first champion herdsire Avalon’s Peruvian Polaris crossed over the Rainbow Bridge last night to join many of his herd mates. Polaris was the herdsire who put Sleeping Monk Farm Alpacas on the map. He sired many champions for us, including Sleeping Monk Farm Peruvian Arlo, our first AOBA National Reserve Champion and then our 7 X Champion, The Monk’s Peruvian Oliver.”

In 2002, Cory and Erin Klement of Summer Hummer Camelids visited Avalon Farm Alpacas with the intent of purchasing a previously identified male. The short story is they took a look at the male they came to see as well as Aries and bought Aries, a juvenile, on the spot. He went on to be a show ring championship and most notably to produce SHC Moonlight Rendezvous. Julie Skinner, previous owner of Snowmass Alpacas, purchased Rendezvous at auction who became “one of the most successful ‘outside’ dams in the history of the Snowmass herd”. Rendezvous is the dam of Snowmass Oblivion, arguably one of the top herdsires in the Snowmass herd since Quechua.

The only male alive of those three full siblings is Avalon’s Tri-Star. He’s up there in age at a little over fifteen years but still available to impart his proven genetics into your herd. (Read more below)

Another winner from our Accoyo/Allianza cross female, Celeste, and our 1/2 Accoyo Royal Fawn son, Aristocrat. Tri-Star is the third in a line of color champions, and he carries on this proud tradition. Like his older brothers, Tri-Star’s bright white fiber has a pleasing soft hand organized in crimpy bundles that cover him from topknot to toe. His typey, conformationally correct frame completes the picture, making him a “complete package”.

At his first show, the 2004 GMAF, Tri-Star won the blue even though he had JUST turned 6 months old. And then, again, at the NIAE he took the blue as the youngest in the white yearling class. Judge Shannon McConnell stated that his balance & proportion were excellent & that his fiber was extremely bright and consistent in lock, bundles and fineness from front to back. Later, in that same show, he took 2nd in the Bred and Owned Yearling class in a competitive field of 4 NIAE Color Champions! Once again, he was the youngest in the class!

Tri-Star has continued to follow in the footsteps of his Color Champion brothers, earning two Color Championships, a Reserve Color Championship, and numerous blue ribbons. At the MOPACA Invitational, Maggie Krieger selected Tri-Star from a field of 60 quality white males to be the Color Champion, citing his “elite fleece” as something we should all be breeding to achieve.

Price: Not For Sale